Looking for a Dollop of the Extreme? Try Flyboarding in San Diego, CA. 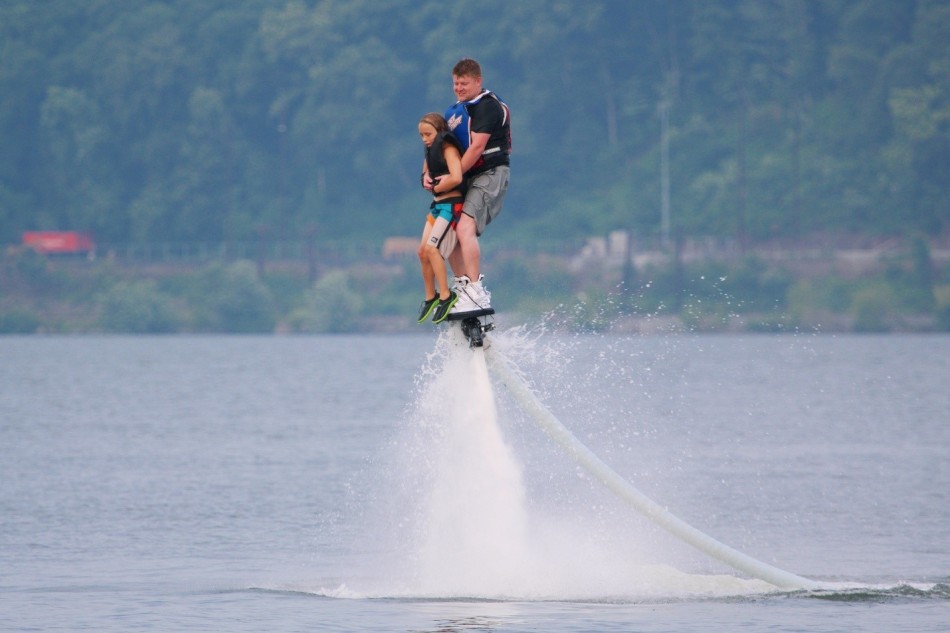 It is no secret that humans have attempted to fly ever since we were mere protozoa. After carefully studying “The Hitchhikers Guide to the Galaxy”, we thought that all we needed to do was chuck yourself to the ground and hope you’d miss. But after several (failed) attempts and one bruised pelvis, we have now come to the conclusion that the authors of the book were full of baloney. But fret not, because in these very lines, you (yes, you) are going to find the secrets to assisted flight, apart from the old “jump, and angels will carry you down” trick.

What is Flyboarding?
The scientific way of flight is simple. You use a plane. But since the act of flying is 85% fun and 15% impossible, why not remove the chance of injury (to our delicate parts) in this delicate process. The latest nuclear option in the water sports arms race is without a doubt, flyboarding, which allows its participants (ex-wakeboarders) to take their talents to new heights and post the videos on YouTube. Similar to wakeboards or Jetovators, Flyboards use powerful jets of water displaced by a Jet Ski to propel the riders up to a jaw dropping forty feet in the air, consequently garnering many stares by passersby in the process.

The Benefits of Flyboarding
Apart from the slack-jawed stares from throngs of people, the benefits of doing Mario jumps are many. Skilled flyboarders can dive down to almost 10 feet below water, then rocket above the surface. To the novice, flyboarding gets them one step closer to feeling like that American cultural icon Superman (FYI: who has been working illegally in America since 1938). Apart from that, participants have also agreed that there are definitely some physiological and psychological benefits of flyboarding too.

Is it Safe (for Novices)?
Contrary to popular belief, flyboarding is actually a lot easier than it looks. Riders control their movements by making basic heel-to-toe and knee movements. The 10 to 20 minute training sessions before each adrenalin pumping flight is usually more than enough to give you all the safety guidelines necessary to stay alive while trying this insane water sport.

Aquatic Aviation Location & Rates
For those who want a taste of adventure and are tired of standing in the sidelines, flyboarding is no longer just for the run-of-the-mill Mountain Dew swiggers. Aquatic Aviation now allows anyone, from champions to celebrities and daredevils to novices to soar into the air. Head out to Aquatic Aviation at H&M Landing 2803 Emerson, San Diego, CA and prepare to get wet. Charges are reasonable so you don’t have to shell out the big bucks either. Aquatic Aviation offers three packages, Aqua Man- 20-min flight ($149), Iron Man 20-min flight ($199) and Fantastic Four 2-hr flight for up to four people ($499).

If you’re from out of town and are looking for a place to hit the hay before you start boarding, there are plenty of options to choose from, Wet Willies to The Grand Del Mar (which makes the Bellagio in Vegas look like a hotel 6). San Diego is home to some of the best eateries you could possibly find. Some of the well known options include, Harbor House, Dick’s Last Resort, Jsix Restaurant, Chianti and the list goes on.

Ending Note
When sports gets too boring, (in this case, Cable skiing) people come up with a more extreme version. Flyboarding is definitely a futuristic take on water sports and provides an unbelievable thrill for novices and an opportunity to do insane aerial stunts for the more experienced riders.