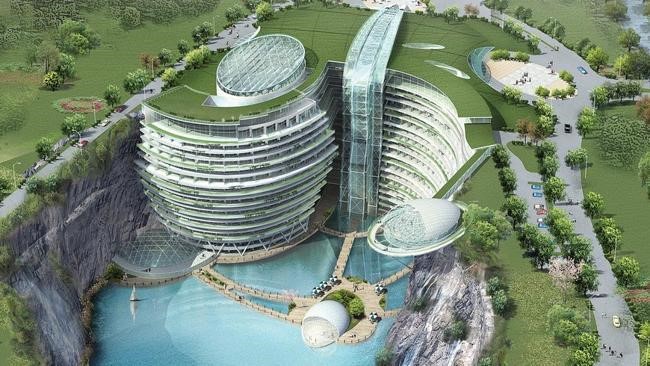 Not too long to go before a new name will be added to the ever growing list of hotel wonder-ventures. The InterContinental Shimao Hotel or rather the Shimao Wonderland Intercontinental, a five-star luxury hotel is under construction as we speak, or type. Set to open its doors to guests sometime in 2015, the hotel is currently being built into the side of an abandoned quarry in the Songjiang District in China, some 30-odd miles from Shanghai.

Located at the base of the Tianmenshan Mountain, the lavish cave like hotel will extend approximately 100 meters into a partly flooded quarry with the top of the hotel just peaking a mere 15 meters above the ground level.

What is being called a ground-breaking environment-friendly innovative idea; the Shimao InterContinental hotel enhances the sprawling landscapes and natural beauty of the stunning location with its rocky cliffs, waterfalls and surrounding hills to make it a highly popular tourist attraction and destination. The concept of the design is to incorporate the hotel seamlessly into the surrounding environment to appear as a natural part of the topography itself.

The many sustainability features included in this project to remain eco-friendly such as a green-roof that utilizes geothermal and solar energy to generate electricity and heating for the resort has attracted incredible interest across the globe already.

The hotel is being designed and constructed by UK architectural group, Atkins and will have a total of 19 stories, 2 of which will be under-water, that will, keeping in line with the rising trend of futuristic hotel designs, feature an underwater restaurant, an aquarium and guestrooms. To achieve this concept, rather than drain the water present in the quarry, it was added to, filling it to become an artificial sunken lake.

This hotel will also cater to the adrenaline-fixated extreme sport enthusiasts as well as the relaxing vacationers with a specifically designed sports center for activities such as rock-climbing and bungee jumping and eco-friendly and leisure-oriented swimming and spa facilities and multiple water-sports on the synthetic lake.

The enormous swanky hotel built at a very unlikely location will house three hundred and eighty guest rooms that have exceptional views of the surroundings – expected to start at $320 a night – along with several business facilities, restaurants, banqueting and conference halls big enough to accommodate approximately a thousand people. The overall design centers on the water theme with the vertical central atrium that connects the base of the quarry to the ground level shaped in the form of a cascading transparent glass waterfall.

The entire project, which was a winning entry of an international design competition, is estimated to cost around US $555 Million to build and operate. This resort is expected to promote new tourism avenues and holiday travel in the region and provide a relaxing environment away from the hustle and bustle of a crowded city life giving its visitors a wholesome and integral experience under one roof.