When In Rome, Do as the Romans Do… Have the Time of Your Life! 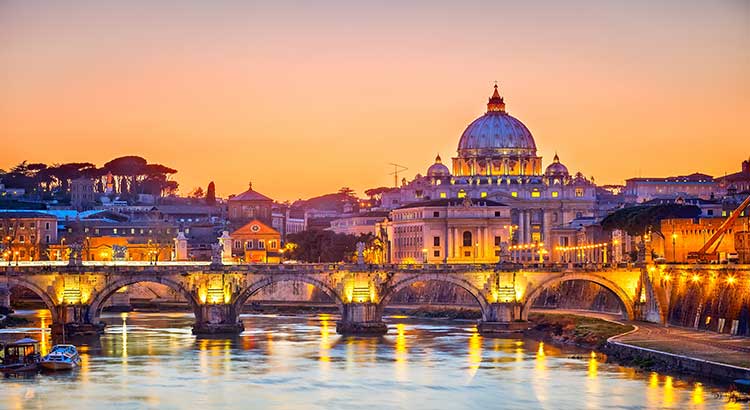 The history of this beautiful city dates back nearly 2,766 years ago. Romulus was the first leader and the founder of Rome. According to legends, Remus and Romulus were the twin sons of the God of Mars. They were abandoned on earth and later found and suckled by a female Capitoline wolf. When they grew up, they decided to form a city, but eventually, an argument broke out between them which ended in Romulus killing Remus. He then named the city after himself – Rome. He started inviting men from different classes to live in his city, even the slaves, as freemen. There were 100 advisors of Romulus and were called the Patres. Their descendants later became known as Patricians.

According to history, the city started as a small village in 8 B.C but gradually transformed into the heart of a major civilization. It is said that the Romans had absolute dominance over the Mediterranean region for centuries. One most popular and dominant ruler of Rome was Papacy who ruled this city for many centuries which lead Rome to be termed as the capital city of Papal States. Later, this city also became home to Vatican City.

Today, Rome is Italy’s capital and the heart of the world’s cultural and political center. It is considered one of the world’s beautiful cities and is an immensely popular tourist location, attracting millions of people from all over the world.

1. Casa Howard
Casa Howard is an inviting and chic guest house. This place provides personal services to the guest while accommodating some hotel-style services, methods and ideas. There are two Casa Howard guest houses in Rome and both are located near the Spanish Steps. One guest house is on Via Sistina and has luxurious rooms. This house was designed by Tommaso Ziffer, a famous interior designer. The other house is located on Via Capo le Case and has five double bedrooms.

2. Hotel Santa Maria
This hotel is situated at a very busy neighborhood – Trastevere. Even with the busy surrounding Hotel Santa Maria is a peaceful enclave and a perfect place to stay. The scented orange trees frame the courtyard which is surrounded by a portico covered complex. The rooms in this hotel are designed in modern Italian country style and have floral curtains, terracotta tiled floors and brick walls.

3. Daphne Inn
This is another great place to stay at for short-term vacationers or businessmen. The rooms of this Inn have optimum efficiency, muted colors and minimal design which make it simple yet classy. This Inn provides maximum convenience to its customers including making restaurant reservation for each guest, organizing transport and full time concierge services including tour and trip planning.

4. Grand Hotel Gianicolo
This hotel is one of the best hotels of Rome and is also budget-friendly. It is located on top of the Gianicolo hill and has the classic Italian design. This hotel boosts an oak paneled formal lobby and floral fabrics decorating all the rooms. Grand Hotel Gianicolo is charming and simple and has a wonderful outside pool and the service is prompt.

1. Vascello
This restaurant is located in the Monteverde side of Rome and is owned by two Sardinian couples. It is a wonderful place to enjoy your lunch and dinner alike. It is a perfect summer dining spot as its high level location makes it a very breezy area which is a pleasant and welcoming escape from the heat. The best dishes here are large ravioli with lemon zest and ricotta, as well as spaghetti with bottarga. Matriciana and Carbonara are also very popular dishes here. Furthermore, the desserts and the wines complete a scrumptious dining experience you won’t forget easily.

2. La Montecarlo
This place is a heaven for pizza lovers as is considered the best Italian pizza place in the city. La Montecarlo specializes in thin crust pizzas of every type including cheese-less Marinara, Margherita, sausage and fish toppings. The most recommended pizza and one of its specialties is pizza with sausage atop with fried egg.

3. Il Margutta RistorArte
This is a place for vegans or vegetarians. It is very difficult to find vegan or vegetarian food in Rome as most of the food has cheese or some other form of animal products, which makes Il Margutta so special. It offers no-meat versions of classic Italian dishes. It is located near Piazza di Spagna and is considered the best vegan/vegetarian specialty restaurant in Rome.

4. La Tavernaccia
This place is cheerful, warm and friendly. The best dishes of La Tavernaccia are garlic bruschetta with prosciutto, grilled fish and meat, as well as traditional pastas and lasagna. There are also some delicious homemade desserts to enjoy here.

Attractions Not to Be Missed

1. St. Peter’s Basilica
This cathedral was initially the largest known church in Rome and is the central basilica in Vatican City. Upon the orders of Emperor Constantine, Rome’s first Christian emperor, the construction of this building was initiated. This is the resting place of numerous popes including Saint Peter, the chief apostle.

2. The Colosseum
This is one of the most popular historical monuments in Rome. This magnificent oval building is almost 188m by 156m wide and 48m long. Emperor Vespasian initiated this building and later Titus, emperor’s son, opened it in 80 A.D. The Colosseum was used for public entertainments like re-enactments of battles, mythological dramas, animal hunts and executions.

3. Capitoline Museums
This place includes three different museums known as Palazzo dei Conservatori, Palazzo Nuovo and Palazzo Senatorio. Capitoline Museums are located in Piazza del Campidoglio atop the Capitoline Hills. This place is considered the oldest museum in the world dating back to 1471 and includes some of the finest classical sculptures of Italy.

4. Vatican Museums
The Vatican Museums are located within Rome’s boundaries and are known as one of the greatest museums worldwide. These museums include collections of the Roman Catholic Church from many centuries ago.

5. The Pantheon
One of the oldest historical structures in Rome, The Pantheon supposedly belonged to the Gods of ancient Rome. Initially, it was utilized as a Roman Catholic Church. This structure is carefully conserved and preserved since the 7th century. The wonderful intersecting domes and arches are one of the most prominent features of this architecture.

Comments to When In Rome, Do as the Romans Do… Have the Time of Your Life!