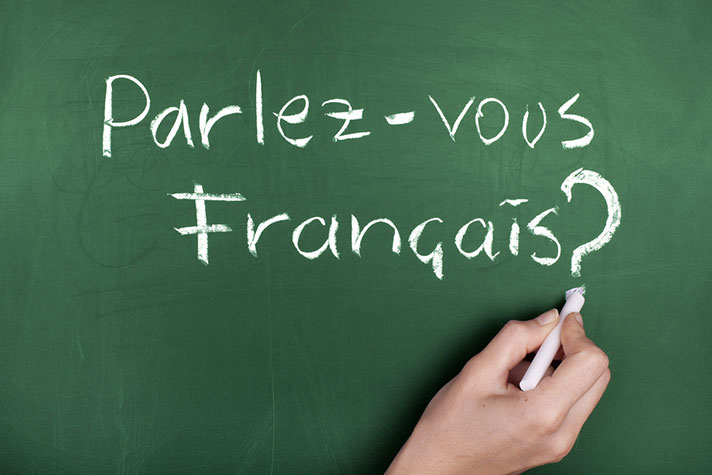 Heading to a foreign land where everyone speaks a language that you don’t is a rather daunting prospect. Not only does this mean that you will be surrounded by people you don’t understand in a city that may be brand new to you and therefore possibly much different than any place that you have ever been, you will also be dependent on the people there who can speak English. And that percentage of people is way less than you might expect, especially when it comes to anything more than conversational or elementary English.

Can you already speak some French? That’s great! But even if you have taken a French class or two in your time, being able to understand and respond to a foreign language in actual conversations is a lot more complicated and difficult than people might think. So being able to utter a few of the more common words and phrases may be helpful, just to be on the safe side.

So, to save you some time, effort and multiple conversations that are filled with helpless smiles, here are 7 French words and phrases you should learn before jetting off to France

I know, I know, if you can speak even a sliver of French, this seems like a super obvious phrase to include. But if you aren’t able to understand it, this phrase is roughly translated as “I don’t speak French”.

The number one downside to learning any foreign language phrases is the fact that people will incorrectly think that you are fluent once they hear you speaking French, when in actuality, you have just memorized a few phrases.

So the minute you finish asking a question/making a statement/pulling out any memorized phrases (including the ones on this list!), you will most likely be unable to understand the flurry of words coming from their mouth in response to what you said since, duh, you can’t speak French.

So, if you need to ask a stranger a question or request, it may be helpful to have this phrase up your sleeve, since it can prevent misunderstandings and lots of shrugging on your behalf.

This is another somewhat “duh” entry for those who speak a bit of French, but bear with me!

Once any person you interact with in France realizes that you can’t understand them (which, let’s be honest, is probably almost immediately), you may be in somewhat of a conversational dead-end. And in some situations, that is totally fine.

But say you need help finding your way to the closest restroom or you need directions. You will have to go through a whole song and dance with every single stranger that you try to get assistance from until you find one that can understand what you are looking for. And that can take quite a while.

So instead of speaking to strangers in English, hoping that one of them will understand enough English and will be willing to help you out, ask “Parlez-vous anglais?” which means something like “Do you speak English?”
Seriously, start with this when you have to approach people for help. It’s a real time-saver for both you and for them.

So whether you forgot to pack enough socks and need to run into a store to pick some up before a meeting or if you just want to buy a trinket from a street vendor, it really does make sense to know how to say “How much?” in French.

While you will have to gesture to what you are talking about (and this translation on its own is a little clumsy, since it is not in the middle of a sentence as it usually is), most people will be super understanding and will try their best to help you out, especially if you are in their store debating about buying one of their items.

So, even if you end up only making one purchase during your trip, it is worth knowing how to ask the price of a given item. I promise.

As you can probably deduce from the fact that it sounds just like “toilets”, this word means bathroom.

Also, since we are on the topic of restrooms, when you are on the lookout for a bathroom, seeing a sign with the letters WC on it means you are headed in the right direction, since many European countries still refer to bathrooms as the “water closet”.

This phrase can help you out if you are continually approached by sales people, vendors or scam artists on the street—and if you are in a big city, you probably will be approached at least once or twice throughout the duration of your visit.

Basically, this phrase means “I don’t understand”. You will most likely end up following this up with “Je ne parle pas français” (“I don’t speak French”).

If you have been asking person after person if they can speak English to no avail, it might be worth saying “Pouvez-vous m’aider?” which means something like “Can you help?”

Also, just in case of an emergency (though hopefully you won’t ever have to use it), you might want to know how to call for help, which you can do by saying “Au secours!”

Fluent in French? A frequent traveler? None of the above but still have thoughts to share? Then sound off below!